If you're a history lover like me, and share my fondness for those interesting Tudors and their era, here is a bit of trivia. On September 21, 1558, four hundred and sixty-nine years ago, Holy Roman Emperor, Charles V expired in a Spanish monastery. Known as Karl, Carlo, and Carlos, he was the most powerful man in his era. Ruler of the Spanish empire, which included American and Asian colonies, the Roman Empire, as well as the lands of the former Duchy of Burgundy.  In fact, the quote "the empire on which the sun never sets" was used to describe the extensive Spanish empire of the 16th and 17th century. In the 19th century, the phrase was passed on the Britsh Empire.

Side note—the German philologist, Georg Büchmann, "traces the idea to a speech in Herodotus' Histories", made by the Persian emperor, Xerxes before invading Greece—cue in the Thermopylae "Hot" gates and King Leonidas. But that is a different era altogether.

The map below shows his European kingdoms in red. Hated and admired throughout Europe and the Levante, he was a pain in the aristocratic behind of England, France, and the Ottoman Empire.

One of his most famous quotes is clear evidence of his extensive domains:

"I speak Spanish to God. French to men. Italian to women, and German to my horse." - Emperor Carlos V

More trivia: Charles V was buried in the chapel of the Monastery of Yuste. He left his son Philip instructions to establish a new religious foundation, where could be buried with his wife Isabella. The result is the stunning San Lorenzo del Escorial built on the outskirts of Madrid. The Monastery, filled with works of El Greco, is a de rigueur day trip. In other words, go see it. 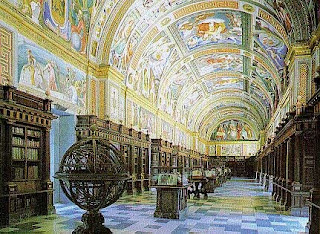 Posted by Victoria Saccenti at Thursday, September 21, 2017 No comments:

Self-Published? This article may help.

Posted by Victoria Saccenti at Wednesday, September 20, 2017 No comments:

The second paragraph will touch the writer's soul.

“‘Susan,’ I says, ‘you’ve been a wery good vife to me altogether: keep a good heart, my dear, and you’ll live to see me punch that ‘ere Stiggins’s’ead yet.’ She smiled at this, Samivel . . . but she died arter all.”

That is perhaps the first and the last time that Dickens ever touched the extreme dignity of pathos. He is restraining his compassion, and afterwards he let it go. Now laughter is a thing that can be let go; laughter has in it a quality of liberty. But sorrow has in it by its very nature a quality of confinement; pathos by its very nature fights with itself. Humour is expansive; it bursts outwards; the fact is attested by the common expression, “holding one’s sides.” But sorrow is not expansive; and it was afterwards the mistake of Dickens that he tried to make it expansive. It is the one great weakness of Dickens as a great writer, that he did try to make that sudden sadness, that abrupt pity, which we call pathos, a thing quite obvious, infectious, public, as if it were journalism or the measles. It is pleasant to think that in this supreme masterpiece, done in the dawn of his career, there is not even this faint fleck upon the sun of his just splendour. Pickwick will always be remembered as the great example of everything that made Dickens great; of the solemn conviviality of great friendships, of the erratic adventures of old English roads, of the hospitality of old English inns, of the great fundamental kindliness and honour of old English manners. First of all, however, it will always be remembered for its laughter, or, if you will, for its folly. A good joke is the one ultimate and sacred thing which cannot be criticised. Our relations with a good joke are direct and even divine relations. We speak of “seeing” a joke just as we speak of “seeing” a ghost or a vision. If we have seen it, it is futile to argue with us; and we have seen the vision of Pickwick. Pickwick may be the top of Dickens’s humour; I think upon the whole it is. But the broad humour of Pickwick he broadened over many wonderful kingdoms; the narrow pathos of Pickwick he never found again.
From Appreciations and Criticisms of the Works of Charles Dickens.
Posted by Victoria Saccenti at Monday, September 18, 2017 No comments: